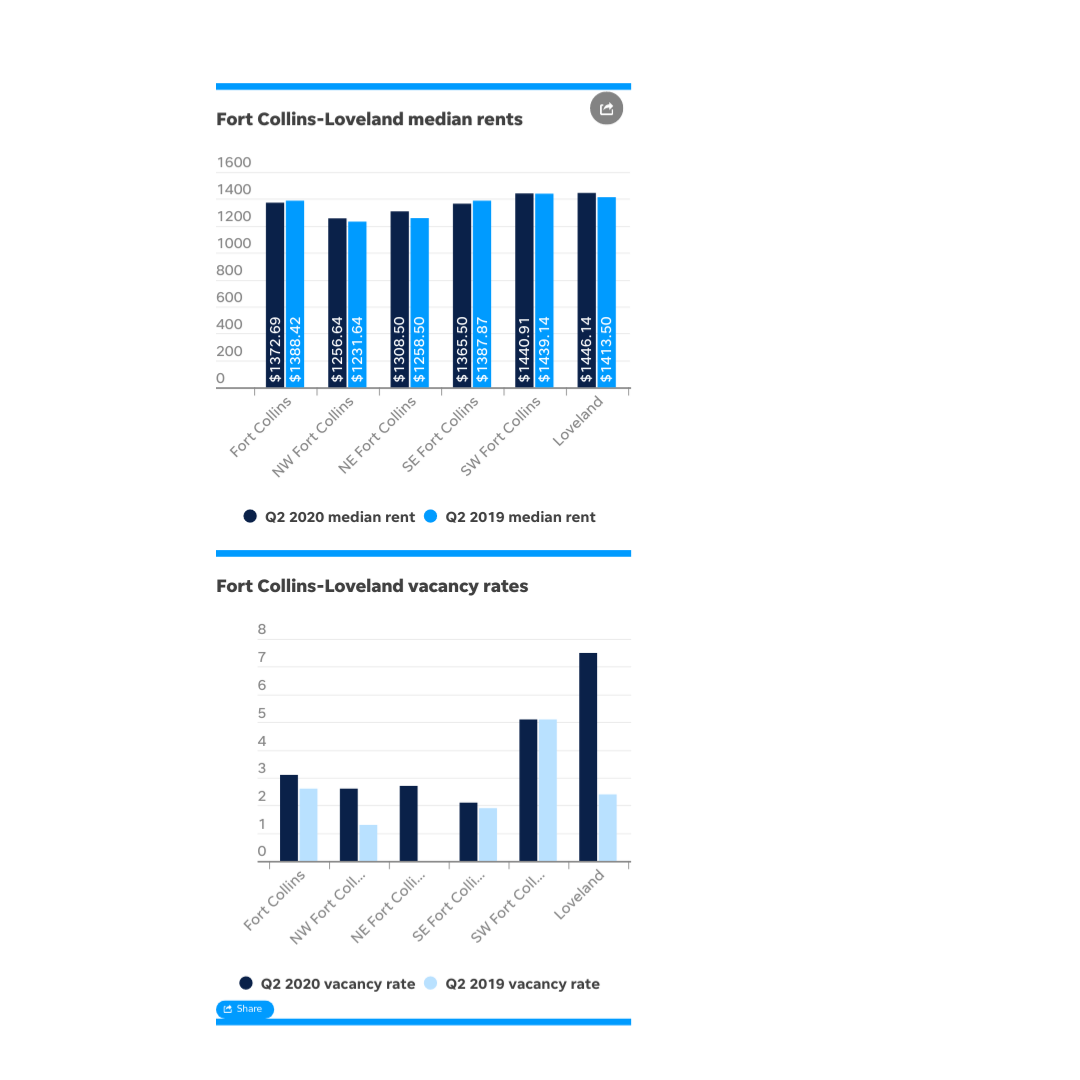 Aug 30, 2020
Market Trends
Investment property owners and would-be owners don't typically ask what vacancy rates are like in Fort Collins, mainly because we've had a zero vacancy rate for 25 years.  Well that changed this summer, with the threat of covid making 100% in-person CSU classes impossible. Pat Ferrier, a senior reporter for the Coloradoan, just released an in-depth article about the state of house rentals and apartment rentals in Northern Colorado (both Fort Collins and Loveland), and it is a good one.  Here is the article, in it's entirety:

Vacancy rates are up in Fort Collins, even as students come back
Pat Ferrier Fort Collins Coloradoan

For the first time in 26 years, Fort Collins Real Estate still had rental vacancies as the fall semester was set to begin.

"For rent" signs are still visible in and around CSU as the university experiences a 5% drop in enrollment and possibly more.

He had two rentals out of 60 still open in mid-August, a small percentage, but enough to make him take note. In 26 years, "there's not even been one that's not been preleased," Jensen said.

But there's nothing normal about this year as the COVID-19 pandemic continues to disrupt academic, social and business life. Some apartment buildings, especially those catering to students, have been slower to lease; others are full.

Jensen's experience is reflected in the city's vacancy rates, which stood at 3.1% in June, three months after CSU sent students home due to the coronavirus.

Vacancy rates are still tight — 5% is considered equilibrium — but a year ago they were 2.6%, according to the Multifamily Vacancy and Rent Survey sponsored by the Colorado Division of Housing.

University of Denver professor Ron Throupe and consultant group Colorado Economic and Management Associates have produced the quarterly report for decades, providing a historical look at vacancy rates and rents throughout the state.

Fort Collins' tight market explains why hundreds of new apartments are still being built throughout the city.

In July, Union on Elizabeth, a 107-unit, 402-bedroom student-oriented complex across from Moby Arena opened for early move in. Representatives from Union did not return repeated calls for comment on lease-ups there.

The rise in vacancy rates is not just because of new product coming into the market or fewer students returning to campus, said Carrie Ann Gillis, a member of the Colorado Apartment Association and Northern Colorado Rental Housing Association.

"With COVID, people may move in and decide instead of having a spare bedroom, they'll move in a roommate, or kiddos may move home with Mom and Dad," she said. "We are not seeing as big a demand for students as we did before."

Students who preleased in the spring are still there. "We saw some renewals that were  later, but the vast majority renewed," she said. "No one really knew what the pandemic meant as far as school."

Those who renewed stayed in Fort Collins through the summer, Gillis said. "We don't experience ... a mass exodus of students for the summer like we did back in the late '80s and '90s."

Vacancy rates were lowest in southeast Fort Collins, an area defined as south of Prospect Road and east of College Avenue. The area includes the new 365-unit Wyatt apartments just west of the Interstate 25 and Harmony Road intersection.

The Wyatt opened in April 2019 and is about 82% occupied, said assistant manager Nancy Richardson.

Otherwise, areas near campus, northwest and northeast Fort Collins have the lowest vacancy rates, at 2.6% and 2.7% respectively. Vacancy rates are more than double the same time last year, according to the report.

Fewer students are living on campus this year

Last week, when students began moving in, CSU was expecting 5,576 students in its residence halls. As of Monday, 4,962 students had checked into on-campus housing, said spokeswoman Dell Rae Ciaravola.

"We expect the number to go down a bit over the course of the week as we process no-shows and last-minute cancellations," she said. "Some students are still arriving, and some cancellations are coming in, so this number will continue to change for several days."

This semester, the university reserved 76 beds in two residence halls for self-isolation/quarantine, reduced occupancy in some of its halls and relaxed its requirement for all freshmen to live on campus.

As of Monday, 400 first-year students had opted to live off campus or at home, Ciaravola said. More than 900 students requested a single room, which is about the same as last year.

The university considered cases individually, taking the student's medical and mental health concerns related to the pandemic into consideration. "Some students requested single rooms while others have chosen to live at home this year."

Because of the lower occupancy of on-campus housing, the university was able to grant more requests than in past years, she said.

While vacancy rates crept up, median rents for the quarter dipped overall about 1%, from $1,388 to $1,372 compared with last year, fluctuating from March to June. Rates near campus went up in the second quarter but dropped in the southwest.

Fort Collins still has the highest overall average rent per square foot in the state, at $1.64, compared with Grand Junction's low of 87 cents per square foot, according to the state report.

Fort Collins' vacancy and rental rates are in line with other college markets like Boulder and Denver around the University of Denver, said Mark Williams, executive vice president of the Colorado Apartment Association.

"These upticks are slight and hard to identify as a trend but would certainly fit the pattern of students not returning in full because of a less valuable college experience with online formats, et cetera, being offered by various institutions," he said.

Vacancy rates around CU are up from 1.6% to 3.4%, but like Fort Collins, Boulder is still a tight market. Vacancies in south central Denver, around DU, are up from 4.7% to 6.4%, but there are other factors going on, Williams said. Metro Denver rental rates have generally leveled off, Williams said, and for the first time in a decade experienced a year-over-year decrease.

"New product in the Fort Collins area (and statewide) certainly is impacting the vacancies to a degree," he said.

Vacancy rates under 4% in a submarket is still considered very tight. "People are still moving to Colorado … and Fort Collins is a very attractive, vibrant place to shop for an apartment."

At Aspenleaf Apartments, seven of 345 units were vacant last week, manager Meghan Bahnsen said. "We've seen a decrease in traffic over the last few weeks that we normally wouldn't have. We are usually full."

The Outpost, a student-oriented complex, had 680 occupied bedrooms out of 712, leasing consultant Carlos Rodriguez said. "People are showing up a little later ... but we've had a good turnout for the year under the circumstances."

In past years, The Grove Apartments, 2101 Perennial Lane in west-central Fort Collins, was 100% leased by the time CSU classes began. But this year "there was a lot of hesitation until people knew exactly what CSU would be doing," said Briana King, assistant general manager at the student-oriented housing complex.

"A lot felt it was best to stay home with their families during these hard times," she said. King still hopes The Grove will be full but said with a predicted second COVID-19 spike this fall, "that could be something that affects our occupancy rates."

Four multifamily properties managed by Robin and Christian Bachelet, including the 2-year-old Apex Apartments, 808 W. Prospect Road, are full. "We had one of the smoothest and most successful lease-up seasons in many years," Robin Bachelet said in an email.

"I attribute it mostly to our new management team providing numerous marketing outlets, real-time communication with prospective tenants and being available for showings evenings and weekends," she said.

Don Dunn, who manages 150 single-family rentals, said all his properties are leased except for two that just became available.

"Students are back and in their properties," he said.

Dunn believes single-family rentals are faring better than larger apartment buildings because of the pandemic and the need to socially distance.

Some landlords are using the market fluctuations to change their inventory mix, shed  units or fix up vacant property.

Fort Collins Real Estate's tenant mix is beginning to include more nonstudents, Jensen said. The impact will be twofold: Some supply will be absorbed by nonstudents and may stay nonstudents. And units that haven't been rented may end up for sale — especially with low mortgage rates — reducing the for-rent inventory.

"In the near term, there will be a small reduction in overall occupancy and vacancy rates will go up a bit," he said.

That could create a problem down the road when the COVID-19 crisis passes and CSU enrollment grows again.There will be less supply for students, especially in single-family homes.

Anticipating the impact of COVID-19, Fort Collins Real Estate sold off between 7% and 10% of its inventory in April, including five that were not in as premium locations as others.

Jensen is also upgrading properties that haven't leased to attract the nonstudent renter. It also means the rent he can charge for that property will go down. Student rentals are typically considered by-the-bedroom, and landlords can charge a premium.

The sales volume and price of homes in Fort Collins "has been incredible," Jensen said. "It's as strong and as fast and furious as I've seen. Inventory is down and prices are up."

He only had two homes still for rent, a small percentage but enough to make him take note because it was a first.

Half of his inventory is rented through CSU's rental fair, with the "best homes" going first.

Pat Ferrier is a senior reporter covering business, health care and growth issues in Northern Colorado. Contact her at patferrier@coloradoan.com. Please support her work and that of other Coloradoan journalists by purchasing a subscription today.

Please feel free to reach out to me to discuss your move into or out of Northern Colorado.  Thank you!